Microsoft is being called out for blocking users of the end-to-end encrypted email service, Tutanota, from registering an account with its cloud-based collaboration platform, Teams, if they try to do that using a Tutanota email address.

The problem, which has been going on unrectified for some time — with an initial complaint raised with Microsoft support back in January 2021 — appears to have arisen because it treats Tutanota as a corporate email, rather than what it actually is (and has always been), an email service.

This misclassification means that when a Tutanota email user tries to use this email address to register an account with Teams they get a classic ‘computer says no’ response — with the interface blocking the registration and suggesting the person “contact your admin or try a different email”.

“When the first Tutanota user registered a Teams account, they were assigned the domain. That’s why now everyone who logs in with Tutanota address should report to their ‘admin’ (see screenshot),” explains a spokeswoman for Tutanota when asked why they think this is happening. 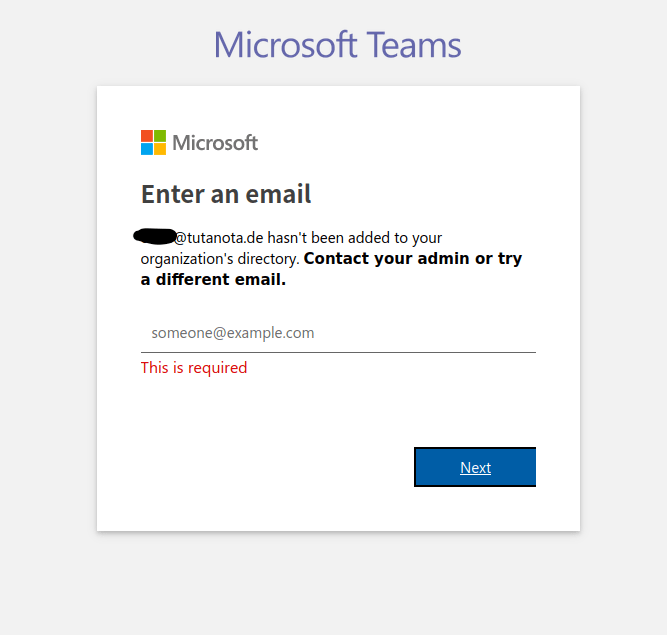 To get past this denial — and register a Teams account — the Tutanota user has to enter a non-Tutanota email. (Such as, for example, a Microsoft email address.)

Unsurprisingly, Tutanota is crying foul over Microsoft’s failure to fix an obvious SNAFU — and urging action from antitrust authorities to ensure that competition generally, and pro-privacy business models like its own, are not harmed by over powerful, gatekeeping tech giants failing to provide a level playing field.

“Politicians on both sides of the Atlantic are discussing stronger antitrust legislation to regulate Big Tech. These laws are badly needed as the example of Microsoft blocking Tutanota users from registering a Teams account demonstrates,” he writes. “The problem: Big Tech companies have the market power to harm smaller competitors with some very easy steps like refusing smaller companies’ customers from using their own services.”

“This is just one example of how Microsoft can and does abuse its dominant market position to harm competitors, which in turn also harms consumers,” he adds.

The German company behind Tutatnota was founded all the way back in 2011, going on to launch its encrypted email client in 2014 — so Microsoft can’t exactly be accused of having its finger on the pulse here.

But Tutanota says that when it asked he company’s support staff to fix the problem they’d created they were told it simply wasn’t “feasible”.

“We have reviewed this internally and as of now, it is currently not feasible for the domain to become a public domain and this is because the domain has used the Microsoft Teams services,” wrote Microsoft support staff in one unhelpful email response to Tutanota which TechCrunch has reviewed.

“As earlier discussed, we are unable to make your domain a public domain. The domain has already been used for Microsoft Teams. If teams have been used with a specific domain, it can’t work as a vanity/public domain,” runs another of Microsoft’s support’s shrugging-off responses.

Tutanota kept on trying to press for a reason why Microsoft could not reclassify the domain for weeks — but just hit the same brick wall denial. Hence it’s going public with its complaint now.

“The conversation went back and forth for at lest six weeks until we finally gave up — due to the repeated response that they would not change this,” the spokeswoman added.

In the blog post, Pfau goes on to argue that “competing with Microsoft is nigh impossible given their sheer market power”, and urges authorities to “break up the market power of Big Tech” — highlighting the contrast between a pro-privacy end-to-end encrypted email service, such as Tutanota, and a tech giant like Microsoft which has a big adtech business that’s fuelled by tracking web users, stripping them of privacy to monetize targeted advertising.

“We need to break up the market power of Big Tech like we did in the nineties. This will lead to a new evolution in today’s online world. One where products rise that concentrate on benefiting the consumer – not maximizing ad revenue,” he writes, adding: “To free oneself from being tracked online, people need privacy-respecting alternatives.”

Microsoft was contacted about Tutanota’s complaint but at the time of writing the tech giant had not provided a response.

It’s not the first time Tutanota has found its users’ access being blocked by larger platforms, having previously experienced issues with AT&T and Comcast in the US.

Since then, the European Union has passed sweeping new antitrust legislation that’s set to start applying from early next year — aka the Digital Markets Act (DMA) — which will set up front rules for the most powerful platforms (so called “gatekeepers”) to pro-actively push them to play fair by other businesses, backed up by a regime of major penalties for violations.

Cloud services are in scope of the DMA — and the regulation also includes a requirement that in-scope core platform services must apply fair and non-discriminatory general conditions of access (aka FRAND terms), among a long list of other operational ‘dos and don’ts’ — so Microsoft’s Teams platform could, potentially, be in the frame for the EU’s incoming special abuse regime to apply to it in the future.

That said, EU lawmakers have previously suggested Microsoft is unlikely to be first GAFAM giant to qualify for the bloc’s shiny new ex ante oversight rules, given how wide-spread competition concerns are when it comes to the full spectrum of Big Tech (i.e. Google, Amazon, Facebook, Apple etc). But the bloc’s direction of travel is now firmly for increased scrutiny of platform power, and on the fairness of its impacts, so Microsoft’s dismissive attitude toward Tutanota’s complaint looks ill-advised, to say the least.

Elon takes the stand, Akio Toyoda hands over the CEO keys and layoffs come for Waymo…

Kuo: Apple plans to release a foldable iPad in 2024, featuring a carbon fiber…